Saint Martin’s curiosities and the uniqueness of its geopolitical situation make it all the more worth the hype. With a long, mixed, and shared history, the island’s best draws aren’t only about its 37 beautiful beaches but also in how it came to be. The US Virgin Islands are like three interestingly different heads in one body. Formerly under the control of the Danish crown, then bought by the US. Now Americanized, Anglophone, and all tropical, Saint Thomas, Saint Croix, and Saint John, offer three flavors all one tropical paradise.

Saint Thomas is one of the Caribbean many underrated gems and is often considered as one of many seasoned travelers’ best-kept secrets in the region. The island is the most cosmopolitan out of all the three US Virgin Islands, offering world-class amenities and features that are ideal for many moneyed travelers around the region.

What makes all three US Virgin Islands equally special and exciting is how ideal they are to visit. It’s like the island has already figured out what most visitors want before they can even ask for it.

For one, underrated Saint Thomas is also ideal for romance and relaxation and friends’ getaways, thanks to its idyllic setting, offering picturesque beaches, local hotspots, exquisite international cuisines while getting pampered in the many spas on the island.

The capital of Charlotte Amalie is probably the most tourist-heavy area and for plenty of good reasons. Saint Thomas is a cruise favorite, so expect to see a lot of visitors hopping off on Havensight Cruise Ship Dock. The founding Danes also left tons of impressions on the city like the colorful, red-roofed building reminiscent of Scandinavia.

Apart from its beautiful beaches, the island is also big for water sports, and tours that take you snorkeling and scuba diving. Some tours even include turtle watching and a multi-beach tour.

One of the former Kingdom of Denmark’s frontiers into the new world, Saint Thomas used to be chartered by the Danish West Indies back in the 1600s, which has booted the first Dutch occupants out in 1672. However, subsequently, was then retaken by the Dutch Brandenburg Company in 1685.

After almost a full century, it was acquired by the king of Denmark and has upscaled Charlotte Amalie into a free port zone and has opened its doors to the world, which has contributed to the development that led Saint Thomas to where it is today.

How Far Is Saint Thomas From Saint Martin?

These two gorgeous islands in the Caribbean are located far from each other, along the northeastern reaches of the Caribbean Sea, in the Leeward Islands northwest of the Lesser Antilles. Saint Thomas is approximately 194.9 km or 121.1 miles from Saint Martin.

All three principal islands of the U.S. Virgin Islands are located far west of Saint Martin, just off Puerto Rico, in the northern Caribbean. Thanks to their geography, this group of islands is famous for their white sand beaches, smaller islands, and cays, which seem to lure seemingly endless volumes of tourists from around the world.

How Do You Get From Saint Thomas to Saint Martin?

Considering these two islands are located in the northern reaches of the Caribbean, along the Leeward Islands in the Lesser Antilles, there are two common ways to get from Saint Thomas to Saint Martin. Flying from Charlotte Amalie to Sint Maarten of Saint Martin Island is probably the most common and fastest way.

You can fly in-between the islands with InterCaribbean Airways, Air Antilles, Winair, Air Sunshine, and Silver Airways, with flights that usually cost around 206 to 419 USD, depending on the season you’re flying, and airline. Flight time typically takes an hour or so.

Saint Croix is the largest island that comprises the Virgin Islands, along the Lesser Antilles, specifically in the Leeward Islands. One of the few constituent districts of the United States Virgin Islands, an unincorporated territory of the USA. Saint Croix is not just a beautiful island with ridiculously beautiful white sand beaches but it also packs a rich history and is one of the best places to dive in the entire Caribbean.

If you visit Saint Croix, you’ll most definitely see the 150+ sugar mills scattered across various parts of the island, as the island was once the Sugar King of the Caribbean. The island also holds a rich history due to its occupations last held by the Danish in 1916. The then-Danish-occupied Virgin Islands were subsequently sold to the United States, and have been an unincorporated territory ever since.

Today, many of the island’s charms and draws come from the leftovers of the many occupations and control over the centuries, and of course, its natural features. Saint Croix, out of all the US Virgin Islands, is a divers’ paradise. “The Wall”, a famous spot for diving, is a 479 mile-long, and 3,200 feet trench that is just ideal for deep diving, tech diving, or just recreational diving.

The island also has three national parks that are perfectly suited for nature-lovers, trekkers, or just the curious explorers, namely: Salt River, a protected ecosystem, speckled with historic ruins, Buck Island, a marine garden, and Sany Bay for its protected Sea Turtles.

Within Buck Islands, you’ll find five of the most iconic historic structures in Saint Croix, in the town of Christiansted, that give culture and history buffs a look into the Danish colonial life back in the heydays of the Danish empire.

If you just look enough, you can see that the island isn’t just about the beaches and the touristy towns, but it is also a mishmash of natural and historical beauty.

Saint John is the smallest of the three main bodies of the US Virgin Islands. Despite them being closely tied and related, each “sibling” of the US Virgin Islands has a unique identity that offers distinct flavors to every kind of traveler. If Saint Thomas is the cosmopolitan sibling, better suited for moneyed travelers, Saint Croix is the more historic, and excursion-worthy sibling, Saint John is the more laid back and pristine, ideal for those looking to laze away the days on this side of the Caribbean.

Beaches in Saint John are diverse and spectacular as they come, as the island has whatever it is you’re looking for in a beach, visitors will surely find one, or even a handful to their liking. The world-famous Trunk Bay is best for kicking back and relaxing. The Salt Pond Bay offers much-needed seclusion, for a bit more privacy. And if you’re traveling as a family, Maho Bay is ideal for children of all ages, where waters are calm and shallow, which is especially safe for the little ones. Cinnamon Bay is where almost everything fun can be done on an island, like snorkeling, windsurfing, kayaking.

Saint John’s white sandy beaches are not just the island’s biggest draws, underwater activities are also ideal here. Whatever level you are in diving, you have more than 500 species of fish, 40 types of coral, and hundreds of invertebrates to explore under the waters of the island. It is also teeming with marine life where you can encounter blue tang, silvery horse-eye jacks, queen triggerfish, spiny lobster, and cleaner gobies are just a fraction of the abundance that is Saint John.

Which is better – Saint Martin or the US Virgin Islands?

Despite being relatively in the same bountiful tropical region, Saint Martin and the US Virgin Islands are different in so many ways, and their draws are as much of a deciding factor as the other. However, if you are well-traveled, chances are you’ve already decided on what you want to take away from a holiday destination.

Saint Martin’s quirky and unique draws have earned it a very reputable name among the travelers’ circle, making it one of the top holiday destinations on this side of the world. The island of Saint Martin, split between French Saint Martin, and the Dutch Sint Maarten, offers double the excitement, and twice the vacation.

While the US Virgin Islands may be a single political body, the islands themselves are as diverse as the plethora of beaches that they have. Colonized and occupied twice over by the Dutch, then the Danish, currently controlled by the US, the islands of Saint Thomas, Saint Croix, and Saint John certainly brings, not just twice, but thrice the excitement.

Saint Thomas, home to the territory’s capital, Charlotte Amalie, is packed with history, a side of beautiful beaches, and a heavy emphasis on cosmopolitan living perfect for those looking to relax, wine, dine, and romance the Caribbean days away. Famous among well-heeled travelers, Saint Thomas, is notoriously expensive as well.

The more historically rich island, Saint Croix is a mine full of cultural wonders giving you an interesting lesson or two of the US Virgin Islands’ rich colonial history. Formerly occupied by the Danish, Christiansted in Buck Island gives you a glimpse of the islands’ colonial life before being bought by the US.

Saint John, on the other hand, is the most pristine, and laid-back among the three principal islands in the Caribbean. Its spectacular white sand beaches create that proverbial Caribbean experience for beach bums, and not only that, the island is famous for its diving sites as well.

To compare them and decide which is better might seem quite unfair as the region itself is teeming with beauty and uniqueness, probably as diverse as there are many islands. However, what best decides your itinerary are the charms you would most likely go for, and to be honest, there are many to look out for in the Caribbean. 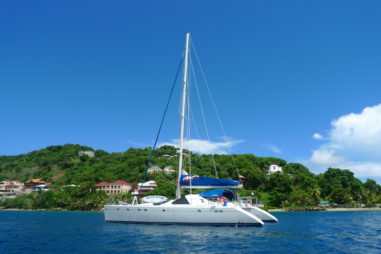 How Do I Get to Tortola From St. Thomas, St. John, and Puerto Rico (Can I Take a Ferry)?

Is Tortola Worth Visiting (The Complete Guide to the Island)